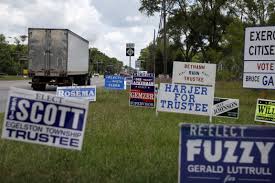 It’s election day. Over the last few months we have been inundated with political signs, waving street folk, ads, phone calls, and door to door visitors. Don’t get me wrong; I love the process. Having the ability to vote (and using FourSquare to check in at my polling place … did you?) is what living in a free society is all about. After many months of the gluttony that is political advertising, there must be something we can learn from all this. I’m happy to report that there is.

These political ad signs sure seem random; almost as if they were just staked scatter shot like at a shooting range. Much thought has gone into these sign locations though. Think about it, why would you place your advertising where people won’t see? Of course you notice when they are on the busy street corners, traffic heavy roads; places where you get good visibility. Same goes for your advertising, put them where the eyeballs are.

The best day for political signs is day 11 after the elections. That’s the day that they legally have to come down. Truth is our disdain for them is precisely why these signs work. You see them everyday. If you’re like me you drive to work using the same route. These signs become a part of your daily routine. You’ll notice when a sign is missing or broken. You’ll chuckle at the occasionally defaced one. You can’t help it. This same persistence is what makes all roadside advertising so effective. Day 1 doesn’t make you buy but by day 30 you have to in hopes that it will make the sign go away. How can you be persistent and not get the restraining order? Find your balance.

Most political signs aren’t meant to teach you about a candidate. Okay maybe how to spell their name but certainly not where they stand on health care, budget deficits or bridges to nowhere. What they are designed to do by using persistence and repetition (see #2) is to make you aware of a name. That’s it. A name. You can do one of two things: A) Research their positions on your own or B) push the button on election day based on just being aware of the name. In the land of elections most of the time B) is all you need. To be aware of a name can be good enough. Products? Services? Sure, sometimes that can work too. If people are aware of your brand you’re already ahead of the game.

Yup the big DUH. This buzz word is overplayed almost as much as Justin Bieber. According to Dan Garfield from orangesoda 97% of political advocacy groups use social media including Twitter, Facebook, and/or YouTube. The average politically oriented Facebook page has 32,588 fans. WHAT? SERIOUSLY? The level of interaction using social media is the most ever for this mid term election. Sure Barack ran to the White House using it in 2008 but its use in 2010 has in some cases even overshadowed that. The fact is candidates are taking their campaigns to where the people are. Remember point #1. Read this excellent Mashable article about how political campaigns are using social media. We could spend all day talking about that. I’m just trying to keep this post moving along…

Don’t be afraid of the big bad paper. It isn’t dead. Mailings aren’t dead either. The evidence of that has been in my mailbox these last few weeks. No fewer than 4 political mailings a day. Phone calls? Yes. Those too. 3 or 4 a day. Door to door? Once or twice. I’ve mentioned the political signs. We’ve been getting a bit of a break from the normal car ads on TV and been getting bombarded with negative political ads. The point is they are coming at us with every conceivable media. Internet, TV, print, radio, Morse code, door-to-door. No medium is dead to political campaigners. That fact alone should tell you that it shouldn’t be dead to you either.

Before you remove your “I VOTED” sticker today, take a minute to remember that you participated in one of the many things that makes this country so great. We were part of the process today. Seriously, what’s better than giving a politician 2 more years of standing around, making empty promises, and spending our money?

Why don’t we answer the phone?

Posted by bsitko - Jun 9, 2011 5
Over the last 10 years we’ve seen some crazy technological shifts haven’t we? Mobile phones can do it all, Internet…

Is there a limit to giving great customer service?

Posted by bsitko - Feb 4, 2014 0
Think of a company who gives great customer service and you probably immediately think of Zappos. The famous, insane and…

Some tips and tricks for your next website redesign

What RealPage will hopefully buy next

Posted by bsitko - Nov 18, 2013 7
I still can’t believe ActiveBuilding’s owners were forced to accept millions of dollars to become part of a large conglomerate.…