Back in December, I saw a signup from Google asking for testers to try a new type of laptop. Of course I was tempted, I’m a geek. Google is always putting out geeky things so it’s a match made in heaven. Naturally then I signed up. Fast forward to May. Imagine my surprise when a box showed up out of nowhere at the office. As it turned out, I was one of the lucky 40,000 who was sent the CR-48 (That’s the beta laptop’s model #). I was extremely excited. After allowing the kids to apply the stickers (they were in the box) I got to work checking this thing out.

This new laptop represents an evolution in computers. What Google has decided to do is remove the concept of INSTALLING anything on your computer. There are no 20 minute operating system installs, no program install files, no corrupted registry, no local virus concerns, no minute or two to wait for it to boot. Instead what you will need is an internet connection…all the time. Luckily they bundle in a WiFi card and when a wireless connection isn’t available, you can use the built in Verizon Wireless 3G card. (and pay the monthly fee of course; I’m too cheap to do that)

To use the computer you need to login with your Google account. Everything you do now is in the cloud. The Cloud? Yup. Rather than saving Documents to your My Documents folder or picture folder now you’ll be forced to save things to Dropbox or Box.net or other cloud based storage services. It isn’t all bad..you do get some local storage but it would act as a file repository only since you can’t do much with them. You can’t install random programs, you can’t install MS Office, there is no Java (thank goodness), no Silverlight. Flash is there but its performance is terrible. The one thing the Google Chromebook teaches you is to think differently. Think about it…so what that I can’t install Office locally! Remember that Microsoft has put Office in the cloud. (Works quite nice too real slick) So..rather than grab the install disk, just type the address into the browser and away you go.

I love the Chromebook’s keyboard. Big keys that feel like I’m really typing something. Sweet. Only complaint is no delete key. Yup, I miss not having it. The mousepad on this thing though is horrendous. Often times it’s unresponsive and stutters. Due to its large size it’s almost impossible to not accidentally have a finger on it which causes unexpected mouse movement problems. Frustrating. I’m still trying to figure out how to right click. Sometimes I can do it and other times nothing happens.

For anyone who uses Google Chrome as their browser, you now know what the operating system looks like. Add the battery indicator and the time to the upper right corner (sans the maximize, close buttons) and you now have the complete picture. 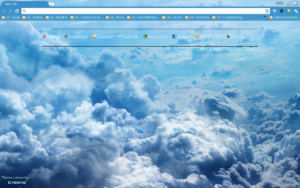 The question remains…is this thing worth $500? No. The mousepad is a nightmare. Let’s face it, you can’t do the same things with it that you can do with even a low end netbook (Those things are total crap though). We might make fun of Windows but let’s face it, lots of things that we like to do are only available on it. What I truly LOVE about it is the concept. Do we really need tons of local hard drive space? As websites become more complex will installing software become the thing of the past? As internet speeds grow faster will it be possible to ditch local storage for cloud based ones? Google thinks so.

There’s no way right now this Google Chromebook is the end all of machines or some technological leapster (such as the iPad) but conceptually it has promise. I can see businesses using it, especially ones who have embraced the cloud with Google Apps or other cloud based software. We Multifamily folks aren’t ready for this yet…maybe someday we will. Still too many reasons why we need to be able to install stuff and run Windows. What will 5 years down the road bring? Hopefully a Chromebook with a better mouse pad.

Multifamily in transition: The future of the ILS

Computer concepts you should’ve learned a long time ago…

Posted by bsitko - Feb 23, 2011 0
Computer concepts that are important and that you should've learned by now. Copy and paste, drag and drop, folders and…