Home/Life /Why I hate job titles

What’s your first reaction when you see these guys? Laborers? Don’t judge. One could’ve been a scholar too.

Nowhere in my neurologist’s office did it say History Professor but when I noticed the Biography of Thomas Jefferson behind his desk last year, the history buff in me had to ask him about it. Little did I know I would spend the next 30 minutes talking to him about American History during the early 1800’s. Turns out, my Neurologist is also a History Professor and loves talking about history. Go figure.

People would want to classify his life with a job title so let’s go with HistoricalProfologist.

People really love job titles. In a psychology sense, it’s how people are able to place other people into compartments that they can understand. It’s called “Person Perception.”

From Wikipedia: Social perception is the study of how people form impressions of and make inferences about other people.

A few years ago, while standing around the snack counter at AIM, Mark Juleen looked at me and asked, “Sitko, what do you do? I can’t figure it out.”

I love ambiguity, especially as it relates to job titles.

If I tell people I’m an IT Manager, they’ll immediately assume many things. That’s the human psychology that’s been hard wired into all of us, which is why I don’t hold it against you. We are constantly inundated with random information and our brains have to filter out and identify what is important and what isn’t and whether or not you’re relevant.

Job titles are generally too specific. They indicate a defined area of focus. I think it should be much more preferable to talk job descriptions. Imagine if all of your Craigslist ads were based on title alone?

I won’t claim to be an expert at anything. That word is over used. I do know some stuff, sure I’m good at things. So are you. By saying I’m an IT guy, you assume I know everything there is to know about computers. Not true. IT is a huge topic with so many different disciplines. I know some marketing, I’m fairly certain that I can write pretty well, where does all that factor in? IT guy who doesn’t know everything about computers but knows how to market and write? How do you make a title with that? 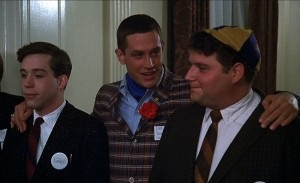 You’re an IT guy? I’m sorry sir, you’ve reached the Marketing Department, let me transfer you. Before you go, I’d like to introduce you to Mohammed, Jugdish, Sidney and Clayton…

In a land of job titles, there is no self-improvement beyond your actual job title. You’re pigeon holed. Shoved into a box where there is little chance of escaping. I would be lying if I hadn’t seen that for myself in this industry. Have you seen it before?

To flaunt my disdain for titles, I recently changed my “job title” to Champion of All Things Nerdy. It’s vague. Kind of funny. Maybe I’m a tech person and maybe I’m not. Here at Maryland Management, if you plug it in, activate it, upgrade it, update it, or create it, I tend to get involved. What does that make me then?

That’s a much better job title for what all of us should be. Where can I help and what do I need to know to do that? Just because my job title doesn’t specify Marketing or Property Management or Accounting doesn’t mean I shouldn’t be afraid to learn it and do it.

Happy renting and make sure you stop using job titles, everyone.