Home/Multifamily Apartments /What RealPage will hopefully buy next

What RealPage will hopefully buy next

I still can’t believe ActiveBuilding’s owners were forced to accept millions of dollars to become part of a large conglomerate. Here’s a question for all of you. Is RealPage really a conglomerate or just a big corporation? Maybe they’re simply a company who collects other companies – like the way my grandmother used to collect stamps. I’m not real sure. Truth be told, I’m not the sharpest tool in the shed, especially when it comes to business law.

What I do know was that watching RealPage pick up another unlucky company got my creative juices flowing. Why, you ask? Well, it sure seems that RealPage has been buying a lot of things lately. I thought that if I could come up with something that they’d want to purchase, it could be me buying rounds of drinks at AIM! I needed to research. What kind of company are they?

So I hit the internet. I searched the first thing I thought of. I was just kidding around when I asked Google who was trying to own the world. I couldn’t believe the suggestions. 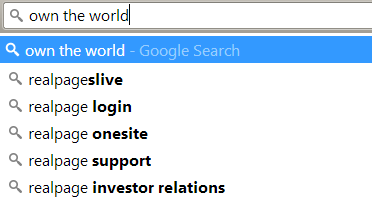 RealPage is trying to own the world, Google says so

Google is so smart. I clicked on that investor relations search result and found out that RealPage is publically traded on NASDAQ. Did you know that? I mean, holy crap that’s pretty awesome. I went over and checked out their stock price.

$25 bucks? Are you freakin kidding me? That’s a lot of money per share! No wonder they are buying everything up. If I had a ton of money to blow like that, I would’ve bought RentSentinel too. No buyers remorse either.

Since it became pretty evident during my search that they have tons of dough to spend, I started to wonder if I could come up with something that they would buy. I’m the creative sort. I have big ideas. I know multifamily. I can surf the web.

PM system that looked like this? Why not? High vacancy never looked cooler.

I brainstormed. My first thought was to create a Property Management system that’s easy to use. There’s nobody out there that’s done that yet. I’ve spent the last 12 years making programs, so I could create it, get a few users, balance some sheets, shove things into a GL, and WHAM! I’d be in financial freedom city, right? RealPage would scoop that thing right up!

Then I realized the problem with creating it would be the amount of time it would take to make it. I have 2 kids, a full time job, a wife who is constantly asking me to do various things around the house; it would take me forever to program and scotch-tape it all together.

Then I had another thought. Maybe I could create a website of some sort. I know how to do that. I’m good at WordPress, PHP, CSS. I could use a lot of hip fonts like Open Sans and Nunito. They look pretty. This website could have the words lease and leasing in it. That always sells. The background could be orange or something. Functionality could come later. I just want them to buy the thing.

This site could be made functional by simply adding a few textareas and input boxes. My how the money would roll in.

I would add some apartment listings up there. Nothing too fancy. Address, property name, ads. I’d come up with a catchy name like Your Old House. Or maybe that’s too catchy and familiar. I’ve never been any good at coming up with names anyway. I could do a survey.

Then the Debbie Downer in me realized the problem with this approach, too. How would I get people to find the darn thing? I’d have to spend money on SEO and SEM and DIY and every other three letter acronym you could think of. I don’t have a huge staff of people or the money to do it.

Sometimes, I’m a sad little dog when I can’t think of something.

My brainstorming started frustrating me. Maybe a service to teach agents how to answer the phone? Industry doesn’t make leasing agents do that now, so that would be pointless. Maybe I could create a Snapchat app for apartments? Marketing messages that self destruct? We don’t need another Craigslist. Another new Facebook? Why bother. No one uses Google Plus now. I felt hopeless – I spun around in my computer chair. I got dizzy.

I had both hands gripping and pulling on my gray and brown hair when my son walked into my computer lair and tapped my shoulder. I stopped my chair from spinning.

I explained my predicament. We need more money to buy you kids more Skylanders. Can you imagine how many we could own? Blah, blah. Then he said something that made the light bulb click on.

“Dad, how can we help you when we don’t what this RealPage looks like?”

I can’t make heads or tails of this stuff. My daughter is an expert

Little bit of Elmer’s glue and a really hot torch were all we needed to create the mascot masterpiece.

My son is a certified genius. Of course! Yes! Yes! RealPage needs an image, a look! They need a mascot! Leasehawk has that hawk. Captain Morgan has the pirate! Makes sense right? What should the mascot be? Maybe a page, from a book, that has eyes, and dances? No, that’s terrible. A duck that squawks, “RealPage!” Been there, done that.

I went shopping. Bought a kit. Got home and grabbed my daughter, she’s craftier. She’s 5. I welded. She cut out pieces. I watched TV, had a snack, napped. She created. The big reveal of our project, the next big thing. The owl. It’s a real hoot.

The new RealPage mascot. Why not? Owls are smart.

I think RealPage needs this. It’s cute but cunning. It wraps their brand around a spokescreature. This prototype is for sale. I’m going to start the bidding on it at $25,000 but I would be willing to go as low as a $1. Will this be their next big acquisition? Stay tuned…..

The results are in! The Owl was purchased. Click here to view the details behind this major acquisition.